Flagstaff is known by many names: The City of Seven Wonders, Arizona’s Mountain Town and the Dark Sky City, to name just a few. At Haunted Flagstaff, we like to say we became a town with ghosts rather than a ghost town. Our tours tell the Anglicized history of this area. Native Americans have lived in Northern Arizona for centuries and their tradition is rich and complex. Hopefully we’ll have a tour (or two) in the future that weaves in the stories of the Navajos, Hopis, Sinaguas and other tribes who roamed this land long before the white settlers. But for now, know this history and the freaky tales we tell of downtown are rooted in the 1870s forward.

There were many factors that played into Flagstaff becoming the city it is today. In the mid-1800s Beale’s expedition made its way across the northern region, scouting a path to the Pacific Ocean. After Beales Road was established, sheepherders and cattlemen travelled the route into the Promiced Land– otherwise known as California. However, when drought and locusts hit the Pacific Coast, a few of the herdsmen remembered the lush green lands and temperate climate around the San Francisco Peaks. They retraced their steps and built their homes, becoming the first white settlers in Northern Arizona.

In the early 1880s, work on the Atlantic-Pacific Railroad resumed. As the tracks neared this tiny settlement, a whole town sprang up overnight to serve the gandy dancers and other workers.The railroad crew was stuck here longer than most areas and some of the workers vowed to return. Others were said to have quit the railroad and settled here in the cool pines. Why? Well, one E.E. Ayers, an entrepreneur from back East, saw the potential in the Ponderosa Pine forest that defines this area. Only three weeks after the first locomotive chugged through town, Ayer’s lumber mill blew its whistle, signaling the first day of business at a mill that lasted almost 50 years. While work there could be dangerous, the pay was good and the job was stable. Men with steady jobs are more likely to have a family, and a town with families is one that needs schools, churchs, grocers, etc. And, just to close this circle, the town’s employers were inclined to invest in their community–which they did, to the benefit of all.

While Flagstaff has grown throughout the decades to become a regional center in Northern Arizona, the historic downtown has retained many of the buildings and bars that were here at the turn of the century. The stories behind the Weatherford Hotel and the Orpheum Theatre are not just about the buildings. John Weatherford–another entrepreneur–was a real character who strutted the wooden sidewalks in front of his hotel. James Vail, owner of the popular Parlor Saloon, was also a mover and shaker in this growing community. Before J.D. Walkup became known as a tragic figure in Flagstaff he guided the town through its post-Depression growing pains. All of these figures–as well as many, many others– are featured prominently in Flagstaff’s history as well as in Freaky Foot Tours nightly ventures. So join us on a tour through historic Flagstaff–the good, the bad and the freakishly ghostly! 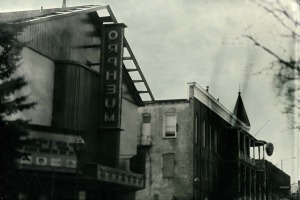